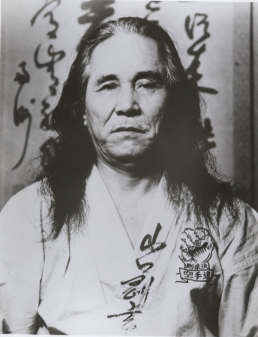 Some readers may have seen a movie which came out a few years ago (1976), entitled "Way of the Sword." It was only a short film, a supporting feature, but it was about the traditional Japanese budo. Various martial arts were shown such as aikido, kendo, and kusarigama but the most intriguing part was the short section on karate, because this featured Gogen Yamaguchi, the headmaster of the Japan Karate-do Goju-kai (Goju Association).

Gogen Yamaguchi was shown sitting in front of a crystal ball. He performed various mudras (mystic hand movements) in the direction of the crystal ball, while doing special breathing exercises. He beat on a drum to summon up the spirits. According to the narration, Yamaguchi uses the crystal ball to communicate with the spirits of fighters past and future. They give him their secrets.

Yamaguchi was also shown doing Tensho kata, a slow, breathing form of the Goju style--I was unfamiliar with the Goju style at this time, and I thought the breathing method looked forced and unnatural--and then two young instructors from the Goju-kai did an exhibition of free style sparring. This looked good, fast, continuous, and with a sharp staccato-type of power. In fact, it was nice to watch--exciting and varied. The fighting was carried out at a little closer distance than, say, in the JKA or Wado-ryu, and the two karatemen stuck to basic fast and strong attacks, with both hand and foot. The blocking was sharp and performed with the open hand. No doubt these two had sparred many times, and it was only a demonstration but still quite impressive.

It was difficult to know what to make of this glimpse of Master Yamaguchi, but he did have "charisma." He always wears traditional Japanese dress. And, although he wears his hair long, this does not make him look up to date, but more like some Yamabushi (mountain warrior) from days gone by, transported incongruously to the Tokyo suburbs. I knew that he was a sort of semi-legendary karate master, a practitioner of yoga and a priest of the Shinto religion. In person I had heard he was generous and helpful.

Gōjū-ryū (剛柔流), Japanese for "hard-soft style", is one of the main traditional Okinawan styles of karate, featuring a combination of hard and soft techniques. Both principles, hard and soft, come from the famous martial arts book used by Okinawan masters during the 19th and 20th centuries, the Bubishi (Chinese: 武備志; pinyin: Wǔbèi Zhì). Gō, which means hard, refers to closed hand techniques or straight linear attacks; jū, which means soft, refers to open hand techniques and circular movements. Gōjū-ryū incorporates both circular and linear movements into its curriculum, combining hard striking attacks such as kicks and close hand punches with softer open hand circular techniques for attacking, blocking, and controlling the opponent, including joint locks, grappling, takedowns, and throws.

Major emphasis is given to breathing correctly in all of the katas but particularly in the Sanchin kata which is one of two core katas of this style. The second kata is called Tensho, meant to teach the student about the soft style of the system. Gōjū-ryū practices methods that include body strengthening and conditioning, its basic approach to fighting (distance, stickiness, power generation, etc.), and partner drills.