Written by: Andrew Zerling
Originally published in the Journal of Asian Martial Arts – Volume 21 Number 1 – 2012
All photos courtesy of Aikido Centers of New Jersey – Manasquan Dojo, except where noted.

The study and appreciation of sumo wrestling, Japan’s ancient and popular martial art, is greatly overlooked in the West. This article focuses on sumo’s winning techniques, with special emphasis on how smaller players can win against larger players. Some famous martial artists who have studied sumo are discussed. Also, there is a brief discussion sumo痴 development, rules, and training, as well as recent changes in sumo techniques. Some parallels are drawn between sumo and mixed martial arts (MMA). Techniques and tactics are presented in detail so readers might add some of these sumo moves to their own martial arts repertoire. The references used to support this article include various published literature and broadcast video.

With a tremendous impact, two strikingly large men collide on an earthen ring. They are thickly muscled, flexible, highly trained martial artists; they are sumo wrestlers (rikishi). When all other things equal, the bigger rikishi usually wins. But rarely are all other things equal. Throughout sumo’s history there have been smaller rikishi who, with the proper technique, have toppled man-mountains. A sumo historian once said the earthen ring that sumo takes place in (dohyo) is circular to help a smaller rikishi angle away from a larger rikishi. This allows for better matches to watch, and it also illustrates that in some ways sumo roots for the underdog.

Some well-known martial artists have studied sumo. Draeger and Smith state in Asian Fighting Arts (1969: 138) that the founder of judo, Jigoro Kano, studied a great variety of martial arts, including sumo, to help formulate his modern-day judo. When Kano wanted to beat a competitor, he would study everything available, along with sumo techniques and even training books from abroad. The founder of aikido, Ueshiba Morihei, had his first real training in the martial arts with sumo. In Abundant Peace (1987: 67), Stevens describes the grueling conditioning Ueshiba did with his sumo training.

In Okinawa, karate master and pioneer Funakoshi Gichin in his youth engaged in sumo-like wrestling called tegumi, which he recounts in his book Karate-Do, My Way of Life (1975: 122-124). Funakoshi mentioned in his book that his tegumi training probably improved his karate mastery. On a more recent note, former UFC Light Heavyweight Champion Lyoto Machida, besides being an expert in Shotokan karate and Brazilian jiu-jitsu, has a strong background in sumo. Machida describes in his book Machida Karate-Do Mixed Martial Arts Techniques (2009: 11, 13, 124 and 148), that his sumo training strengthened his fighting stance and base, as well as his mind... 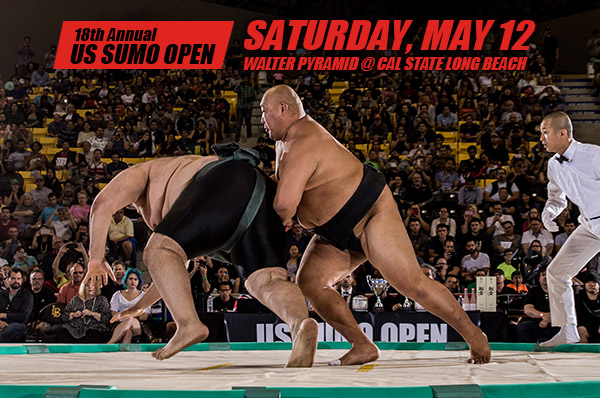 Could This Be the BEST EVER?

With the MOST wrestlers (60+), who have the MOST World Champion titles (7+), and the MOST World-level medals (30+), this is a tournament you've gotta see! Your location: the edge of your seat . .

The 2015 US Sumo Open returned to the Walter Pyramid on August 8, 2015. Nearly 4,000 fans watched history being made, as Byamba's 8-year streak of gold medals was ended at last by Ramy Elgazar (Egypt) and Roy Sims (USA). In fact, until the final match of the day, all 29 previous heavyweight and openweight gold medalists (for 15 years) had been foreigners, but with a victory in the openweight finals, Roy Sims entered the history books as the first American EVER to win a US Sumo Open gold medal in either the men's heavyweight or men's openweight divisions!