Kaloudis Sensei, is without a doubt the major pioneer of Koei-Kan in the United States, Europe, and Latin America.

The immeasurable contributions and promulgation of Koei-Kan Karate-do outside of Japan has truly created a system of Budo, thanks to the efforts by Sensei Edward Kaloudis. Kaloudis Sensei, of Greek origin, began his martial arts training in Judo. Learning Judo on a Greek freighter bound for Japan was the original spark that ignited a fire storm of the traditional martial arts system. With the visitation of Kaloudis Sensei to Japan, the opportunity came to learn Karate not only in Japan, but from the introduction to Kancho Eizo Onishi, founder of Koei-Kan Karate-Do, with whom he was accepted as a student and practitioner of Koei-Kan Karate-Do. 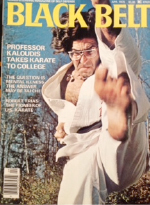 Eventually obtaining the rank of Ni-dan (2nd level black-belt), Kaloudis Sensei settled in New York, where he began to teach Koei-Kan, while a student at New York University in 1956. He later established Koei-Kan headquarters in New Jersey. As an 8th degree black-belt, he served as executive Director of Koei-Kan Karate-Do as well as International liaison.

Several dojo function on the East Coast as a result of Kaloudis Sensei’s unstoppable drive to imprint real Budo on his students in College and in the surrounding schools of Koei-Kan which exist today. Kaloudis Sensei is responsible for starting the exclusive Koei-Kan Karate-Do martial arts championship tournament in the late 60’s which continue to survive to present day. The continuing Taikai International Championships are testimony to the devoted Koei-Kan presence in the United States.

For a deeper understanding of the principles and specialized training secrets and methods, go to Budo Secrets »