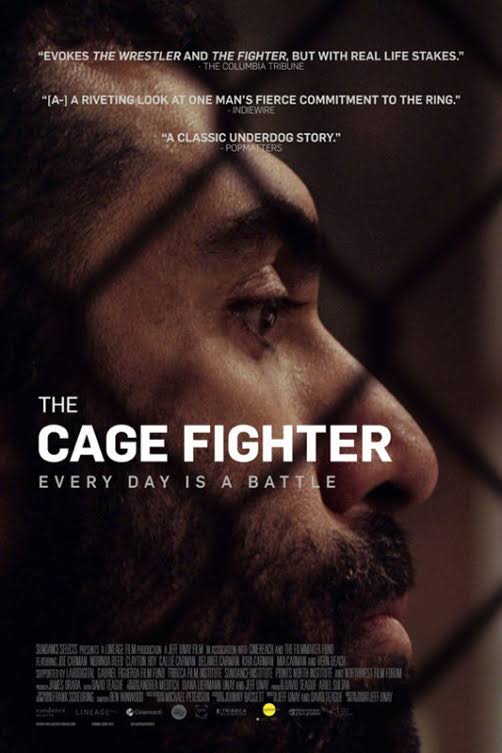 If The Cage Fighter were a fiction film rather than a documentary, it would feel awfully familiar. This portrait of an aging amateur mixed martial arts fighter uncannily echoes Hollywood movies such as The Champ, Rocky, The Wrestler, Raging Bull and countless others. That the real-life figure at its center seems hellbent on following a trajectory similar to those films' fictional characters gives the documentary its emotional power.

Marking the directorial debut of Jeff Unay (a visual effects veteran whose credits include Avatar and Peter Jackson's King Kong), the documentary revolves around Joe Carman, who's facing a tough time as he turns 40. Based in Washington state, Joe toils in the boiler room of a ferry. But his real passion is mixed martial arts, which he continues to pursue despite no apparent success and the strong disapproval of his wife and daughters, who have recently discovered he's fighting again after he had promised them he would give it up.

Joe's aging body is not his friend. He struggles to lose weight, and when a trainer chastises him, he responds, sorrowfully, "I work in a boiler room all day long! I gotta drink water! I gotta eat!" He also experiences recurring vertigo; during a medical examination, his doctor tells him he may be suffering from post-concussion syndrome.

Joe has personal issues as well, including his wife's chronic illness (it goes unspecified in the film, which is not strong on delivering relevant information). When Joe visits his parents, he gets into a vicious argument with his elderly, alcoholic father who loudly berates him. When he goes to court to try to prevent his ex-wife from relocating with his daughters from his first marriage, his appeal is denied by the judge. The only pleasure Joe seems to achieve comes from his loving interactions with his young daughters from his current marriage and the pet goats he keeps in the backyard.

Lacking narration or graphics, the documentary employs a fly-on-the-wall approach that proves frustrating. There are times when it pays off, with two of the more compelling scenes involving Joe's interactions with fellow fighters. In the first, one of his contemporaries points out that "fighters are like strippers" as both tend to have mental issues and expiration dates. In the second, Joe sits at a bar with a younger fighter who lengthily recounts his many personal problems stemming from his vocation, including the recent ending of a long-term relationship.

The most powerful sequence shows Joe fighting a match, one which he had made the unfortunate decision of bringing his daughters to watch. As Joe gets pounded unmercifully by his opponent, his little girl breaks out into hysterical sobbing.

The Cage Fighter, like so many cinema verite-style documentaries, often causes the viewer to wonder how much its subjects are playing up to the camera. That feeling is particularly strong in this case, with Joe often seeming to be relishing the frequently self-induced drama in his life as much as suffering from it. But if he is acting, he's doing a damn impressive job of it.