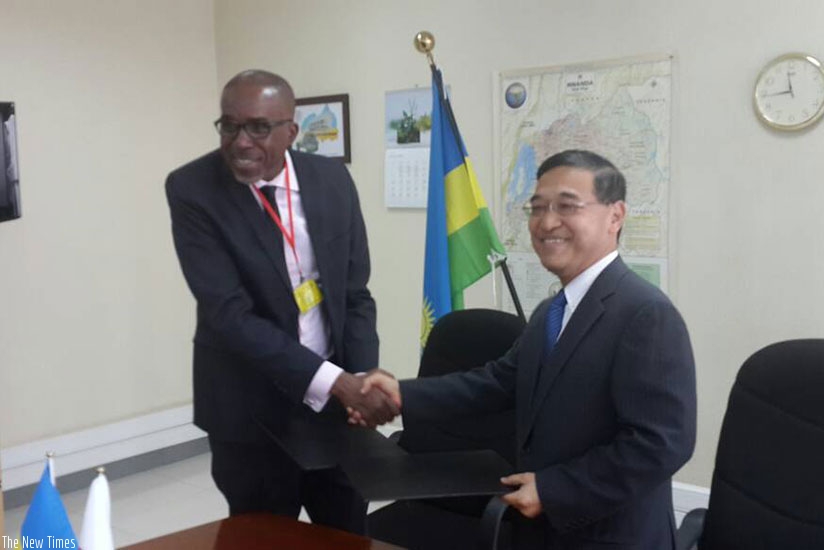 The Japanese envoy to Rwanda, Takayuki Miyashita, and the Rwanda Karate Federation (FERWAKA) president, Theogene Uwayo, on Friday signed a grant agreement under which the latter will receive Karate equipment.

Under the deal, signed at the embassy, Japan committed to provide US$67,372 (about Rwf57million) to purchase Karate equipment, especially 400 karate tatami mats, three scoreboards and 30 flags for local referees.

Amb. Miyashita said: “It is my pleasure to learn that very many Rwandans, more than 3,000, love and practice karate. During last year’s Japan Ambassador Cup, I realised that the mats you’re using are for Taekwondo that’s why the government of Japan decided to help provide 400 karate tatami mats.”

The envoy said the equipment will get in the country latest September.

According to Uwayo, the signing ceremony was a culmination of “very good cooperation between the two countries”.

The equipment will be very helpful and we are grateful for the support, he added.

This is the first grant under Japan’s Grant Assistance for Cultural Grassroots Project in Rwanda. Under the program, the Embassy of Japan provides grants to NGOs and local authorities which promote culture and higher education in Rwanda.

The Embassy of Japan has for years been working with FERWAKA to promote the Japanese martial art of karate in Rwanda. This year, the third annual Karate Ambassador’s Cup will take place on February 10 at Amahoro Stadium.

Miyashita noted that he expects the donation will motivate more Rwandans to play karate. It is expected that Karate will become an additional Olympic event for the Tokyo 2020 Olympic Games.

The envoy reaffirmed his willingness to continue to support Rwanda in the field of sports and culture.