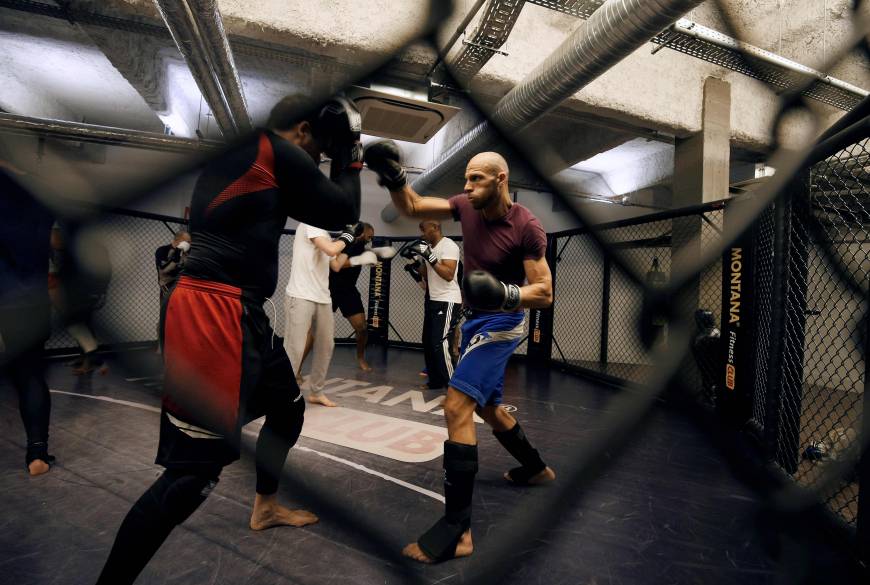 People take part in an MMA (mixed martial arts) training session on May 2 in Paris.

PARIS – Combat sports are booming around the world but in France increasingly draw the attention of intelligence services hunting potential jihadis.

Long concentrated in poor suburbs and with no real organization watching over their activities, critics say the mixed martial arts, judo, kick boxing and other clubs are ideal for fomenting radicalization and jihadi training.

Ironically, many of the clubs get subsidies from French town halls.

Mederic Chapitaux, who has written a book, “Sport, The Fault in State Security,” about the phenomenon, believes France should not be alone in worrying.

“We know this has a national dimension, European, worldwide,” said Chapitaux, a former gendarme and technical director for a contact sports federation.

Just before a group of suicide attackers killed 130 people across Paris on Nov. 13 last year, a Central Territorial Intelligence Service note was leaked.

It warned of the radicalization in suburban, amateur sport — particularly the combat clubs. Sports Minister Patrick Kanner said later that France had completely “underestimated” the risks.

His ministry launched a Citizens of Sport plan aiming to reinforce education for sports trainers to counter radicalization.

Chapitaux said the “signals” of trouble were missed.

Fighters increasingly covered their bodies, even for showers, prayer mats appeared before and after training, there was a growing rejection of mixing with women.

“Trainers and social workers did not understand the growth of the phenomenon,” said Chapitaux. “And if someone did try to impose rules, they were accused of racism.”

Less than two weeks after the Paris attacks, Said Itaev, an international wrestling champion originally from Chechnya, was ordered to be kept under house arrest, reporting to the local police three times a day.

The restriction was only lifted one month later so Itaev could take part in the French championships with his club in eastern France where he was employed as a trainer.

Chapitaux said he believes trainers are often recruiters for radical groups. He said that qualifications are nonexistent or difficult to check, but “the danger is immense because the trainer in sport influences the mind and body.”

Combat sports, and martial arts in particular, are a particularly good way to prepare for jihad.

The pro-jihad website, Azzam.com, closed down after the Sept. 11, 2001, attacks on New York and Washington, produced a manual copied by other sites, which told how to prepare for action.

“It is vital to join a martial arts club as part of the training for jihad,” it said, vaunting the need for “self-discipline.”

“In some countries, there are martial arts run by Muslim instructors, but one can join other clubs if there are no Muslim clubs in his area.”

Chapitaux writes in his book that militants have taken over the slogan of pioneer French physical education instructor Georges Hebert: “Be strong to be useful.”

Critics of the clubs point to the case of Yassine Salhi, who belonged to a combat sport club in the eastern French city of Besancon.

In June 2015, Salhi decapitated Herve Cornara, owner of a company based near Lyon where he had worked.

Choulet was killed driving a truck packed with explosives in a suicide attack in Iraq in February 2015.

Salvi became a radical during a prison term. He now teaches combat sports in the British city of Leicester.

“A lot of vulnerable young people find a second family in these clubs,” said one mixed martial arts club owner in the Paris region.

“I have seen people try to recruit youngsters with this profile in my gym,” the owner said. “I have protected youths from this situation.”

French Judo Federation President Jean-Luc Rouge said the main problem is with fringe combat sports. “They are not in the mainstream and the instructors are mainly volunteers.”