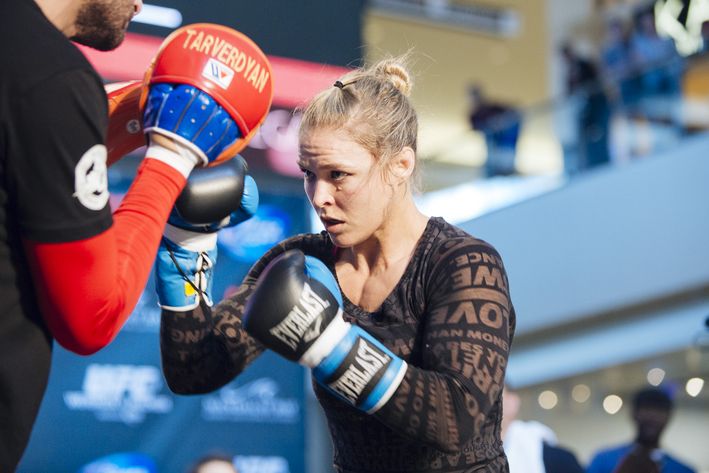 GLENDALE, Calif. -- Ronda Rousey has shattered the glass ceiling for women in MMA so thoroughly. Could her next step be reinvigorating another women's combat sport?

The UFC women's bantamweight champion has expressed a significant interest in boxing recently, appearing on the cover of Ring magazine this monh and spending time with Golden Boy Promotions head Oscar De La Hoya. Rousey even admitted during her UFC 193 media day Tuesday that she'd "like to" compete in boxing in the future.

"I want to be more involved with the sport," Rousey said. "It's very difficult right now. But I'll see what I can do."

Is this all smoke and mirrors, related perhaps in a way to her next opponent, Holly Holm, who happens to be a former three-division boxing champion? It's hard to say. Rousey does have an incredible amount of things going on in her life. Along with being far and away the biggest star in mixed martial arts, she also has a burgeoning acting career and is on the verge of breaking through in a big way in Hollywood.

Then again, Rousey is someone who has competed in sports her entire life, first in judo and now in MMA. Boxing would almost be a natural progression, especially since that is her primary training focus under coach Edmond Tarverdyan at Glendale Fighting Club.

Rousey has dispatched her UFC opponents with such efficiency it's easy to forget that we've seen her improve in almost every fight. Early in her career, "Rowdy" finished opponents almost exclusively with armbars. She has only won that way once in her last four fights. Rousey remained standing with Bethe Correia, her last opponent, and knocked her out with a single right hand to the temple.

Don't think that Rousey won't be looking at Holm, a two-time Ring magazine female boxer of the year, as another chance to prove herself in that aspect of the game on Nov. 14 in Melbourne, Australia.

"Ronda can box," Tarverdyan said. "Ronda has knockout punching power in both hands. It doesn't matter what hand she touches you with -- it's dangerous. She's proved that with the last fight."

Tarverdyan let it slip this week that De La Hoya was the one who orchestrated Rousey's Ring cover story, which drew some controversy. Rousey is not just the first MMA fighter to grace the front of the magazine; she's also only the second women to do it. Many purists felt like if the cover was going to be a female, it should have been a pugilist -- not someone who wears the small gloves of MMA.

De La Hoya obviously disagrees. He told Fight Hub this week that he sees it as something of a jumping-off point for women's boxing.

"We have something brewing and this is obviously the beginning," De La Hoya said. "It's created a lot of big buzz within the boxing industry. Mission accomplished."

The legendary boxer knows a thing or two about drawing power. Rousey has it in spades. And De La Hoya said he has already talked to the Los Angeles native about promoting her in boxing.

"We've discussed it and whenever she's ready to step into the ring as a fighter, as a boxer, then obviously Golden Boy Promotions will be right there with her," he said. ... "She's tough. She's really good. Speed, power and instinct, which is very important. She dares to be great. That's the difference between her and a lot of fighters."

One of the obstacles in the way of Rousey's desire to box is the UFC, though brass seems to be accepting of her relationship with De La Hoya. The UFC and Rousey together have helped build her into a massive pay-per-view force and it's unclear if the UFC would be open to letting her compete on that stage in another sport for another promoter -- unless there was some kind of financial deal in place.

The UFC did let Rousey appear this year at WWE Wrestlemania, but president Dana White has said that would be a one-and-done thing. Rousey has expressed a desire to return for further WWE appearances, though.

"Right now our focus is on MMA," Tarverdyan said when asked about Rousey boxing. "Does she want to? The UFC has been great. She's a great MMA fighter. That's what we're focusing on."

It won't be a boxing match with Holm next month. Rousey's advantage will be on the ground. Although, as a competitor she will almost certainly want to test herself standing, Holm's greatest strength and best path to victory.

"I think that this match would help to kind of show some of my striking legitimacy with the boxing crowd, but it's still a different sport," Rousey said. "I think I would only really be able to prove that I could have any respect as a boxer if I beat a boxer at their own sport instead of beating them at mine."

Toward the end of her media day in LA, an older reporter from a Spanish-speaking media outlet pushed through the dense row of cameras. He wanted to know about Rousey's Venezuelan heritage and if she spoke Spanish. Venezuela, he said, is known for producing talented boxers. So why not try it, he asked her.