Shorinji Kempo claims to be a holistic system, whose training methods are divided into three parts: self-defense training, mental training, and health training. The basis are the concepts that "spirit and body are not separable" (心身一如: shinshin-ichinyo) and that it is integral to "train both body and spirit" (拳禅一如: kenzen ichinyo).

Through employing a well-organized technical course outline, Shorinji Kempo claims to help the practitioner "establish oneself" and to promote "mutual comfort". The philosophy and techniques of Shorinji Kempo are outlined in their handbook, (少林寺拳法教範) Shōrinji-kempō-kyōhan.

There are two sides of Shorinji Kempo which are believed to be true budō (武道) and educational system. As the latter, the organization is well known for their mental training institution as well as body training facilities dōjō (道場).

The founder, Doshin So, wanted to establish not only an organization which incorporated mental and physical training but also wanted to educate Japanese people who had been completely demoralized by World War II. His aim was to defuse those who had lost their way and rebuild Japan for the future. It is said that he tried to teach Buddhist philosophy but no one followed him. Later on, So reportedly saw a vision of Bodhidharma, which inspired him to pursue teaching martial arts, as Bodhidharma was believed to have done so. Both of these are later to become the main training methods of Shorinji Kempo.

Technically, Shorinji Kempo has a whole set of defense techniques but the demonstration known as embu (演武) is the commonly demonstrated technique. The embu consists of (typically) 6 sections and each section includes a series of gōhō (剛法) or hard techniques and jūhō (柔法) or soft techniques. During the embu, one person attacks and another person defends, they then swap roles and repeat the technique immediately. Each technique is known as hien (飛燕) or flying swallow which represents speed and smoothness of those techniques. The embu is occasionally performed wearing a black robe, called hōi (法衣) at the beginning ceremony of annual taikai (大会) or convention.

The bones and ashes of Doshin So are buried behind the lecture hall.

The organization of the Shorinji Kempo group is divided into 5 entities:

The relationship between these five entities is very close because of the unique fusion of religion, martial arts, and education. (Source: web site of Shorinji Kempo Foundation Federation and Shorinji Kempo Kyohan written by Doshin So)

The name "Shōrinji" is a literal reading of the Chinese "Shaolin Temple" from the Shaolin Monastery in Henan Province, China. Dōshin Sō claimed to have inherited the title of the 21st master of the Giwamon-ken (義和門拳) system (in Mandarin: Yihe Mén Quán) which is believed to have been used during the Boxer rebellion of 1899 to 1901.

Dōshin Sō was very much impressed to see paintings on the wall of Byakue-den (白衣殿) chapel at Shaolin Temple. The style of the monks practicing the martial arts was very fresh and vital to him. He believed it was the origin of the existing quan fa in China. (source: a book "Hi-den Shorinji Kempo" 秘伝少林寺拳法「光文社」written by Doshin So, published by Kobun-sha Kappa Books)

The swastika, called manji in Japanese, was originally the emblem for Shorinji Kempo, as it is used in Dharmic religions, as well as by many cultures around the world, for centuries. The swastika can either mean love (left-facing) and strength (right-facing) which symbolize Kongo-zen teaching. However, given the social stigma that the swastika carries, the WSKO replaced it with the character 拳 (ken), which means "fist", in the center of tate-manji (swastika guarded by shields) on the emblem or using nagare-manji which meant "rounded swastika".

In 2005, the Shorinji Kempo Group has employed a new symbol for all the international Shorinji Kempo federations. The new mark is called so-en (double circle) and it is said that this is the extreme shape of two swastikas intertwined. The so-en emblem is put on the training uniform (keikogi), belt (obi), and the hōi, a black robe worn by high-ranking practitioners during exhibitions.

Doshin Sō, birthname Michiomi Nakano, was born in Okayama prefecture and spent his youth in northern China, first with his grandfather and then as an intelligence agent of the occupying Japanese Army to collect military information during the war. As part of his cover, he was posted to a Taoist school as an apprentice. There, Nakano met Chen Lian (陳 良), a Taoist priest and master of Báilián Mén Quán or Báilián Quán (meaning "White Lotus Fist"). After some time, Chen introduced Nakano to Wen Taizong (文 太宗), a master in Yihe Mén Quán or Yihe Quán (meaning "Righteous Harmony Fist"). Wen would take in Nakano as his student at the Shaolin Temple, at Henan, and passed onto him the title of grandmaster in that specific style of quan fa.

In the final days of the Second World War, the Soviet Union broke its neutrality pact with Japan, declaring war. The Soviets invaded Manchuria on 9 August, and overran the Japanese in less than 11 days. The aftermath was appalling; Japanese casualties were tenfold than that of the Soviets;both civilians and wounded Japanese soldiers were left to die while the army retreated; and many Japanese civilians committed mass suicide. It was in this carnage that Dōshin Sō recognized and understood the "nature of the human being". According to his book, the nature and quality of the person is extremely important since politics, law, and day-to-day living are all conducted by human beings.

After returning to Japan, Sō thought of establishing a cram school for young people. He was stationed in the small town of Tadotsu, on Shikoku island, to teach Buddhist philosophy. He established Shorinji Kempo to take the concept of ken-zen ichinyo by following Bodhidharma and made use of techniques he had learned in China (source: the book "Hi-den Shōrinji Kempō" (秘伝少林寺拳法) written by Dōshin Sō, published by Kobun-sha Kappa Books). This promotion and campaign was known as Kongō-zen undō (Diamond-zen campaign) and expanded Shorinji Kempo throughout Japan by his pupils. This campaign and concept was inherited by his daughter Yūki Sō (宗 由貴 Sō Yūki) after his death in 1980 till present. After his death, Dōshin Sō is called "Kaiso" or founder.

Shorinji Kempo is neither a traditional form of martial art nor a kind of competitive sport.[1] It is said to be as a religious gyō among pupils. According to the Buddhist doctrine, the spirit and fleshly body are inseparable. By practicing Shorinji Kempo techniques and learning its philosophy, it is believed to develop a firm body like a pair of standing Vajradhara (金剛神: Kongō-shin or 金剛力士 Kongō-rikishi) and the never-give-up spirit of Bodhidharma (菩提達磨: Bodai-daruma). 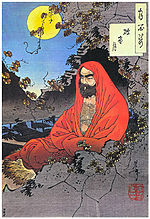 Doshin So in his book, "What is Shorinji Kempo?", said that he pursued his revelations and the development of the fighting technique of Bodhidharma known as the Arakan no ken (阿羅漢之拳) or the Arhat fist. He believed this to have originated in India around 5,000 years ago. He was inspired by seeing representations of the wall paintings at the Shaolin Temple in China.

Those who practice Shorinji Kempo are called kenshi (拳士). Kenshi always salute with gassho (合掌) the greeting commonly used among Buddhist pupils. The gassho-rei(合掌礼) is also gassho-gamae (合掌構) stance, with both palms put together and raised in front of one's face.

There are qualifications for 1st degree black belt (1st "dan") in order to achieve the steps of body and spiritual training: These are bukai, hōkai, and sōkai.

From 1st to 3rd degree, the examinations are held in each prefectural Shorinji Kempo organization headquarters. However, the special examination is only held at its main headquarters in Tadotsu for the qualifications of 4th degree and above. Outside Japan 3rd degree practitioners (san-dan) are considered teachers. In Japan , 4th degree practitioners (yon-dan) and above are considered teachers, but those ranking at the 5th degree (go-dan) and above are officially called sensei (先生: teacher). Kenshi who obtained 4th dan automatically obtain Sei-kenshi as well.

WSKO's qualifications and conditions are a little different from its Japanese domestic counterparts.

Also, there is a sokai (priesthood rank) qualification in Kongo Zen Sohon-zan Shorinji. 2nd dan or Sho-kenshi will study Kongo zen's philosophy and submit an application form and thesis.

Embu is a combination of hokei (organized patterns of goho and juho techniques) which has 6 sections. It is similar to "kata", except that two or more people participate. Embu is performed in the court, in the gym, at a Taikai or other ceremonial occasions. In these patterns one kenshi takes the part of attacker (kōsha 攻者) and one acts as defender (shusha 守者); they then change roles and repeat the technique. After the set form technique the kenshi perform ren-han-ko (連反攻: a series of offence after defence) which is a free form counter-attack which continues until the original attacker successfully blocks/parries and counters. The juho techniques are followed by katame (pinning techniques) or kime (finishing techniques with various hand strikes or kicks to nerve points).

Embu start with gassho-rei and are performed usually in kumi embu (pair), tandoku embu (single) and dantai embu (6 or 8 in a group).

Initially, there was no regulation in performing embu. Nowadays, it is rated out of 5 (sometimes 3 at preliminary selection) judges having 60 points each for the 6 sections and 40 points each for other factors for comprehensiveness. The maximum possible total of 300 points can be achieved after eliminating the highest and the lowest scores when 5 judges are judging. Kumi-embu and dantai-embu are performed within a time limit of between one and a half to two minutes.

The most famous embu pair was Masuomi Nakano and Toshio Misaki whose embu was said to have impressed Doshin So.

Earlier in Shorinji Kempo's history, was the Unyo-ho, a fighting competition. After many accidents during sparring bouts with no headgear, the organization required the wearing of headgear, body protectors, and groin guards. A system of limiting each kenshi to one role of defender or attacker was also introduced for safety. Rating is done by judging attacking points, defensive techniques and counter-attacks.

The BSKF applied to the British Intellectual Property Office (IPO) to register the trademark that it has used for 25 years. Shorinji Kempo Unity opposed the application, but the IPO found that SKU had not demonstrated genuine use of its registered trademark. SKU appealed the decision. In the High Court, the appeal judge found that SKU had shown genuine use of its mark, but that the BSKF mark can be registered. In particular, Judge Warren found that Shorinji Kempo is a generic term, which simply describes a martial art, and even if this were not the case, there is no possibility of confusion of the BSKF's mark with that of the SKU.

Lack of activity destroys the good condition of every human being, while movement and methodical physical exercise save it and preserve it.
~ Plato