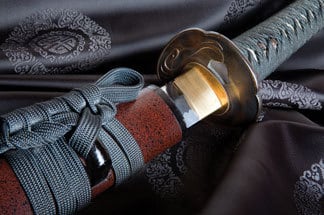 From the medieval epics of Akira Kurosawa to the space operas of George Lucas, the samurai have long inspired us with stories of their legendary swords and superhuman skills. Nowadays, when we think of samurai, we imagine invincible warriors like Miyamoto Musashi nimbly wielding super-sharp swords, slicing through ninja and catching blades with their bare hands.

But how much of that is actually true? To test these myths, we asked Samurai Swordsmanship authors Masayuki Shimabukuro and Carl E. Long to answer the most common questions we receive about Japanese swords. Enjoy part one of our series on samurai myths.

A good samurai sword will slice through a silk scarf that’s dropped on the blade.

Fact: The katana and other Japanese swords are designed to slice objects as the blade is pulled across the target. If an object is simply dropped on the blade, it’s very unlikely that any slicing action will occur.

This is why so many exhibitions that involve walking on swords are possible. As long as there’s no sliding action, the blade rarely cuts. If a scarf is allowed to slide across the edge, the material could be cut. This myth has been carried over from a story about a Damascus blade owned by Saladin.

A katana can chop a regular sword in half.

Fact: Any steel sword can break if it’s struck at the wrong angle. Chopping one in half, however, is highly unlikely.

In battle, Japanese swordsmen would use the edge of the blade to block their enemy’s attacks.

Fact: The edge of the blade was often used to block an opponent’s attack. However, most swordsmen would fend off an attack by launching a pre-emptive strike or receiving the attack on the side of the blade. This was preferable to blocking with the ha (cutting edge).

It’s possible to stop a downward sword strike by trapping the blade between your palms.

Fact: This is highly implausible and definitely not recommended.

Thinking that it’s better to lose an arm than lose his life, a samurai was taught to block a downward slash with his forearm held overhead at a 45-degree angle.

Fact: A katana or tachi is quite capable of slicing through an arm in a single stroke. At that time in history, losing an arm usually meant death.

Fact: This is more myth and legend than fact.

A samurai wasn’t allowed to place his sword back into its scabbard without first drawing blood.

The steel in some swords is composed of thousands of folded layers.

Fact: Each time the sword smith folds the steel, the layers are multiplied. It’s not uncommon to have as many as 32,000 layers.

The bo hi (often translated as “blood groove”) is designed to channel blood out of the opponent’s body.

Fact: This is a common misconception. The bo hi is designed to lighten the blade while maintaining a large degree of structural integrity. It was sometimes used to hide flaws in a defective blade.

Thousands of samurai swords were thrown into the ocean when Japan surrendered to the United States at the end of World War II.

Fact: Many blades were destroyed by Allied forces at the end of the war. Some of them may have been cast into the sea from aboard ships, as were many other weapons.

Welcome to Part 2 of our series "Samurai Facts vs. Samurai Myths and Legends." To help us separate fact from fiction, we asked Samurai Swordsmanship authors Masayuki Shimabukuro and Carl E. Long to answer the most common questions we receive about samurai history and Japanese swords.

The best swords are now made in China.

Fact: Not true. Many functional blades are made in China, the United States and other countries. Each sword is manufactured to fulfill a specific need, and some people desire a less expensive blade than is currently available from Japanese manufacturers. The most expensive and prized blades are still made in Japan.

Fact: Tameshigiri was the practice of testing a sword’s cutting ability. A proficient swordsman was called on to test the blade and give it his recommendation. Suemonogiri was the testing of the swordsman’s technique and was often performed by swordsmen of all ranks. All cutting harms a blade in some way, either by dulling it or subjecting it to rusting or bending. Unfortunately, some test targets have the potential to do more harm than others. Hard targets can chip a blade, while soft targets can bend and/or corrode a blade. The greatest threat to any sword is the cutting ability of the user.

A bokken can defeat a sharpened steel sword in combat.

Fact: A bokken wielded by a more experienced swordsman might defeat another less skilled or less lucky swordsman who’s using a shinken. Miyamoto Musashi defeated many swordsmen using only a bokken, but it was Musashi who defeated them, not his bokken.

A samurai would sometimes use two swords simultaneously in battle.

Japanese swords were always carried in a waistband with the edge facing up.

Fact: Incorrect. The tachi was worn edge-downward from a harness while wearing armor.

The giant swords often seen in Asian museums, some of which weigh more than 10 pounds, were actually used in battle.

Fact: True. Some of these nodachi were employed against men on horseback during cavalry charges. Some were also made as ceremonial swords.

You can find valuable Japanese swords at gun shows and garage sales.

Fact: It’s possible to find such “undiscovered treasures,” but they’re becoming more and more rare. Most of the valuable swords have been acquired by avid collectors during the past 40 years.

Fingerprints will ruin a sword.

Fact: If fingerprints aren’t removed, the rust that forms will pit even the best of blades.

Slicing through paper, which is often done to test the sharpness of a pocketknife, will dull the edge of a sword.

Fact: Cutting paper will dull any blade, including a pocketknife. In fact, cutting any material has the potential to dull a blade. Every blade is affected differently by cutting paper, and some dull more easily than others.

Shaving off arm hair is a good test of the sharpness of a blade.

Fact: It’s also a good way to lose a massive amount of blood. There are better ways to test the edge. Touching a sharp blade to any part of a living thing isn’t recommended.

In Part 3 of our "Samurai Facts vs. Samurai Myths and Legends" series, Samurai Swordsmanship authors Masayuki Shimabukuro and Carl E. Long answer the age-old question: Who would win during a samurai staring contest?

On the battlefield, two samurai would often face each other for hours before the first attack was executed.

Fact: Hours? Perhaps a few minutes felt like hours when lives were hanging in the balance. However, it’s doubtful that warriors spent hours posturing and assessing each other’s abilities—at least not in a dueling situation. Armies may have spent hours facing each other in preparation, but duels were generally fought quickly.

Samurai would occasionally test the quality of their blades by cutting down peasants who happened to be walking by.

Fact: Throughout history, civilized societies have been plagued with individuals who engaged in aberrant behavior. It certainly has happened, but it wasn’t done by the majority of samurai. The samurai’s position was to protect the people and see to their welfare.

A cut executed with poor technique will bend a sword’s blade.

Fact: Absolutely. If the hasuji is off by even a slight angle, a sword can bend. If the left hand is improperly aligned during a nukitsuke (drawing cut), it can cause the blade to twist, as well. All techniques must be learned under the guidance of a qualified instructor who corrects the swordsman’s technique.

Fact: Every sword is different. A well-made carbon-steel blade is certainly less likely to break because of poor technique or target resistance than a stainless-steel sword is. But every sword has the potential to bend or break if the technique isn’t exact.

Owning a katana is illegal for the ordinary Japanese citizen.

Fact: Ordinary citizens in Japan have the right to own Japanese-made blades that are registered with the Nihon Token Kai (Japanese Sword Association). These swords must exhibit historical or cultural significance. A certificate of authenticity and ownership permit are necessary. In Japan, sword smiths are allowed to produce only two swords a month as cultural artifacts. Each sword smith’s work is evaluated and rated by the token kai, and the prices are then adjusted. Unlicensed swords or those made by unlicensed smiths are confiscated, and the owner may be charged with possession of an illegal weapon.

Jujitsu techniques were designed to battle the samurai’s sword.

The karate concept of “one strike, one kill” originally came from the Japanese sword arts.

Fact: The aim of any martial arts technique is to achieve maximum effectiveness. This wasn’t a foreign concept to the Okinawan people, who had their own weapon arts. This misconception came from the adaptation of kendo rules to karate competition during the introduction of karate to Japan.

The Ministry of Education insisted that karate authorities develop a set of competition rules before the art could be recognized as an official “Japanese budo” or form of physical education on the mainland. The karate authorities adopted the ippon shobu rules that had been established for kendo. They were based on the presumption that to be considered a full point, a strike had to be technically sufficient to kill an opponent.

The hakama (baggy trousers) is designed to hide the footwork of the swordsman.

Fact: This is a fallacy. The hakama comes in many forms: field hakama, riding hakama, undivided hakama, hakama with leggings and so on. Each style was worn by the samurai on different occasions. Some formal hakama were designed to prevent any fast movement of the feet at all. Most samurai would tie up the bottom of their hakama so as not to restrict their leg movements during battle. This misconception probably comes from modern budo teachers who allow only the senior members of their dojo to wear a hakama, thus supposedly “hiding” their advanced footwork.