How to view sumo up close and in person: asageiko 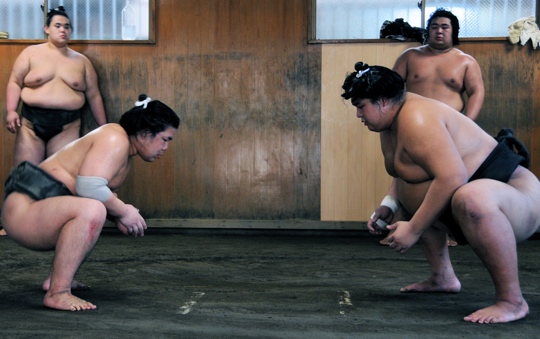 Ready, steady ... : Sumotori face off at a morning practice session, which is easier to witness
than you might think. | HARUNA MIYASHITA PHOTO

To many Japanese, the closest they will ever get to a sumotori — just one of several words employed in Japanese to describe a professional sumo wrestler, — is at one of the six annual honbasho tournaments held in Tokyo (3), Osaka (1), Nagoya (1) and Fukuoka (1).

Few will ever think of attending a morning training session known as asageiko. And it is likely that fewer still will ever realize that they can easily, with just a little effort, attend what is perhaps the very best opportunity to see sumo up close and in person.

Today, several companies charge tourists a small fortune for the opportunity to visit a sumo stable for a couple of hours to see the early morning training. The truth is, though, with a little planning and the aid of an alarm clock, you can do the same for no charge.

Many of the over 50 stables do welcome early morning visitors, despite the oft-repeated fallacy that asageiko is an off-limits area of the world of sumo, accessed only by those with the most intimate contacts in the sport. For the most part, they are located in the Ryogoku and Kiyosumi areas of eastern Tokyo. Most start their morning practice around 6 a.m., although smaller stables with fewer wrestlers do get underway a little later — that said, they rarely start after 7 a.m. which means you will have to be an early bird to take advantage of this aspect of sightseeing. At many stables, especially in the run-up to the tournaments in Tokyo, it’s common to see foreign faces among the viewing ranks — particularly so at Musashigawa Beya in the area near Uguisudani in northern Tokyo; Kasugano Beya near Ryogoku Station; and even Takasago Beya, home of yokozuna Asashoryu, near Asakusa Station.

To attend an asageiko session and see just how physical and perhaps surprisingly technical sumo training is simply do your homework and the cultural obstructions some claim to be in place preventing non-Japanese in particular from attending will, in most cases, melt away. Calling ahead* is always recommended and should be done in Japanese — get a hotel or hostel staff member to help in this regard if need be.

Ideally, you should call the day before, and not really expect training to be held on a Saturday or Sunday, unless you are around the weekend before a tournament starts. During the actual tournaments, training does take place but at a somewhat less-intensive pace, as wrestlers do not want to be injured, and even at this time, it is possible to pop in and visit. The week after a tournament concludes is another period when the sumotori tend to have some time off and thus are unlikely to be putting in the hours on the practice dohyo.

Most stables will welcome visitors although several, for reasons such as joint stable training sessions at which many fighters attend, or sessions held especially for certain pre-arranged support groups or the media, may opt to keep their doors closed on a given day or two.

Visitors to sumo practice should also follow a few basic rules of etiquette when visiting a stable.

— Bowing to any seniors overseeing the practice upon entering. Don’t expect a reciprocal bow. Also, it is polite to bow upon departure too. If no seniors are immediately visible, then bowing toward the wrestlers on the dohyo fighting area will suffice.

— Observe all practice sessions in silence. The wrestlers keep talk to an absolute minimum and those watching are expected to follow suit.

— When sitting and watching, many heya (stables)will offer a cushion called azabuton. Position this behind and to the left or right of any attending seniors (if not indicated where to sit), and not too close to the dohyo. Try not to move around too much, although rearranging leg positions is fine as there is no need to sit throughout in the traditional Japanese sitting style as this can be uncomfortable for extended periods.

Food and drink is a no-no unless offered by the staff (though this is not common for those unknown to the heya). No sumotori actually eats or drinks until after practice each morning (should you see them using water it is simply to wash out the mouth). Smoking is, of course, another activity to avoid even if stable masters partake. Asking stable masters to refrain — as one non-Japanese couple were about to do recently — is not recommended. You are guests in their home.

In most heya, you should refrain from taking photos until after training, although it is not unusual to see those clueless to the fact that shutter noise can disturb the concentration of wrestlers, or those who have been permitted to take snapshots. Many of the men practicing from dawn will happily pose for pics after they have finished and are relaxing outside the stable in the cooler morning air, so don’t be afraid to ask. If you speak a little Japanese they will also be happy to chat for a while too.

Feet should usually be covered and not have the soles pointing towards the dohyo, and even if summer, exposing a little too much skin by donning running shirts and the like might be frowned upon.

The above rules aside, observing asageiko will for many prove to be one of the most memorable periods spent on a trip to Japan. And it’s not nearly has difficult as you may imagine. Just be prepared to plan ahead and attendance at one of the least known, frequently ignored aspects of this wonderful sport will remain etched in the memory for years to come.