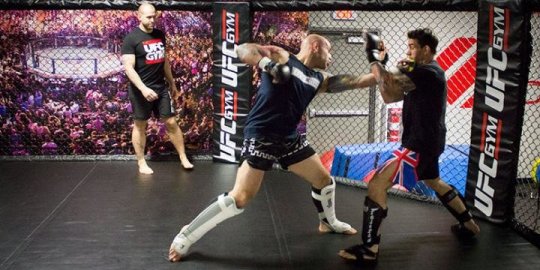 November 6, 2015Source:University of AlbertaSummary:Researchers evaluate a decade's worth of post-fight medical examinations to shed new light on injury risks of combative sports. The research offers a first-of-its-kind glimpse into the dangers of the two combative sports, and is the direct result of the author's quarter-century of experience as a ringside physician conducting post-fight exams, which are mandatory in both boxing and mixed martial arts.

Mixed martial arts has a reputation for being one of the most brutal and bloody of all contact sports, but the reality is boxing poses a greater risk of serious injury, according to new research from the University of Alberta.

Researchers at the U of A's Glen Sather Sports Medicine Clinic reviewed a decade's worth of data from medical examinations following mixed martial arts and boxing matches and found that MMA fighters face a slightly higher risk of minor injuries. Boxers, however, are more likely to experience serious harm from concussions and other head trauma, loss of consciousness, eye injuries, smashed noses and broken bones.

"Yes, you're more likely to get injured if you're participating in mixed martial arts, but the injury severity is less overall than boxing," explained lead author Shelby Karpman, a sports medicine physician at the Glen Sather clinic. "Most of the blood you see in mixed martial arts is from bloody noses or facial cuts; it doesn't tend to be as severe but looks a lot worse than it actually is."

The research offers a first-of-its-kind glimpse into the dangers of the two combative sports in Canada, and is the direct result of Karpman's quarter-century of experience as a ringside physician conducting post-fight exams, which are mandatory in both sports.

In this study, Karpman and U of A Faculty of Rehabilitation Medicine colleagues Leah Phillips, Ziling Qin and Doug Gross, and Patrick Reid of the Edmonton Combative Sports Commission, reviewed post-fight records from 1,181 MMA fighters and 550 boxers who fought matches in Edmonton between 2003 and 2013.

They found that 59.4 per cent of MMA fighters suffered some form of injury in their bouts--significantly higher than the injury rate of 49.8 per cent for boxers. Most of these injuries were bruises and contusions. But boxers were more likely to experience loss of consciousness during the bout (7.1 per cent compared with 4.2 per cent for MMA fighters) or serious eye injuries.

Boxers were also significantly more likely to receive medical suspensions due to injuries suffered during bouts.

Karpman said there is risk in any contact sport but that MMA, more than any other, faces a stigma from the medical community from physicians who see the sport as ultra-bloody and violent. As a result, fighters have become "an undertreated athletic population," and these research results should help them understand the risks of climbing into the ring, he said.

"These guys do not get the respect they deserve for what they're doing--or the medical treatment--because the medical community doesn't want to deal with such a bloody sport with head injuries and concussions," Karpman said.

Most fighters understand the risks they face before they get into the ring, but the research results do line up with the real-life experience of 14-year MMA veteran Victor Valimaki.

"Most injuries happen during training. Injuries during an actual fight are superficial--typically black eyes, cuts and the odd broken hand," he said.

Banning combative sports not the answer

Karpman says it's puzzling that in a sport like hockey, catastrophic blows to the head can land former NHL players like Scott Stevens and Chris Pronger in the hall of fame, whereas MMA and boxing are vilified with frequent calls to ban the sport with little understanding of the true risks.

The research was published in the peer-reviewed Clinical Journal of Sports Medicine.

The above post is reprinted from materials provided by University of Alberta. The original item was written by Bryan Alary. Note: Content may be edited for style and length.