Tameshigiri - Test of a Swordsman 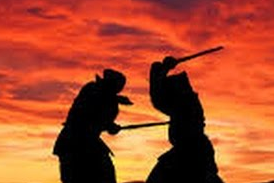 Kenjutsu, as opposed to Iaido and Kendo is the art of using a live blade in combat. It is not a sport or 'do' (way). In medieval Japan, the Kenjutsu practitioner's focus was on cutting down an opponent without sustaining any injury to himself. Like any type of live blade work, the situation was do or die, therefore, the swordsman must be sure that when the blade strikes in the heat of battle it cuts clean and sure from whatever posture or position they are in. Although this has little application in today's society, serious students of sword work should focus on the intent of the sword rather mimic the actions. One practical application of the sword today is in tameshigiri. Tameshigiri is literally test cutting, but it is not enough to statically cut a straw target. Tameshigiri should also be a test the techniques of a schools in a combination of movement and cutting.

Tameshigiri is generally performed on one of two target types: Bamboo or Straw. For the sake of convenience the straw has been replaced by the processed straw material used to cover tatami matting of the type found in every Japanese home. The target is set on a stand or suspended in some way so that the traditional cutting angles will pass through the target. The straw/tatami mat used is soaked to give it the consistency similar to flesh and the addition of bamboo through the centre adds the consistency of bone. Targets are set up in an array of positions to allow for the practice of single of multiple cutting techniques. Sometimes entireKata (forms) are practiced with each cut of the blade actually cutting a target.

Tameshigiri has been practised in Japan for centuries, on armour and more infamously, on the bodies of live and dead criminals. Traditionally tameshigiri was used to test the blade. Many leading sword smiths of the day used specialist swordsmen to test the blades and some even had the success of the cut described on the tang of the blade. One such tang describes cutting through seven bodies in a single stroke. Obata Soke currently holds the all time record for cutting into a 16th century helmet with a blade made in America, sword smiths and blade makers were always in competition with each other. The link with the present is the skill required by the swordsman to complete these cuts. In the past it tested blades, today it tests the cutting ability of the student. Not only does a blade need to be of good quality; a swordsman needs exceptional technique to cut well.

Much of Kenjutsu is practiced with a wooden sword (Bokken or Bokto) primarily as safety measure for students. Some schools even use the shinai in close two man training applications for safety reasons. Whatever the training tool, in Kenjutsu the student must always remember that the wooden sword represents a real sword. This requires emphasis because most students pick up the wooden sword and swing it like a blunt weapon. Many schools even teach techniques purported to be based on real sword techniques, but are in fact the application of a blunt weapon not an edged weapon, this is through ignorance or that the original technique has been lost over time.

I put emphasis on hitting techniques because these are akin to Bokken Jutsu not Kenjutsu. The techniques of Kenjutsu are cutting techniques only. The katana, a light weapon with a sharp edge, cuts with a push and pull motion. To illustrate this point, take a razor blade and try to cut paper by applying pressure downwards only it is not nearly as effective as if you draw the blade back as you cut down. The katana is not a meat cleaver or axe and as such will not cut effectively in a chopping or hitting action. Bokken Jutsu, however, has an emphasis on bone breaking where the technique applies as much power to a single point as possible creating damage through impact at that given point. There is no expectation that the bokken will pass through the target, therefore, there is a different emphasis on the weapon motion after contact. Initially students of the sword always swing the weapon like a baseball or cricket bat in the mistaken belief that this method and added power will cut, many are in for a rude shock and generally end up bludgeoning a tameshigiri straw target to pulp. Students need to be shown how to cut with the blade, in our modern western society, cutting is not a natural action.

Many Kenjutsu or Iaido schools never attempt even basic techniques with a live blade and target, which is like learning to fire a rifle without even discharging the bullet. There is an emphasis on the techniques leading up to the event (to cut) without actually completing the cycle (will it cut?). Ultimately many schools have very long histories, which may have begun in the times of civil strife where blade skill was life, however, years of peace and interpretation have eroded the techniques. These schools remain today as an art form and practitioners need to recognise this. Many current school techniques would never survive on the battlefields of medieval Japan.

Basic cutting techniques must included a swinging action that pushes or pulls the blade through the target, a grip that allows the practitioner to control the blade in terms of power and blade alignment, a stance that provides safety for the swordsman and finally has a foolproof provision for stopping the blade after the cut; ready for anything. Basic tameshigiri training teaches the student these four principles. These points are as important to sword work as it is to teaching a boxer how to form a fist; that is, it must become the basis for all future techniques and performed without conscious thought.

Every time the Kenjutsu students picks up a bokken, shinai or iaito it should be seen as a live blade, every swing with these weapons must be a cut. Only then will the schools techniques translate to cutting ability, as is the intent of sword work.

Advance cutting needs to combine the dynamic techniques of the school with cutting ability. This adds a new challenge for the student in terms of body position and movement and requires additional focus on cutting action, blade alignment and safety.

Tameshigiri is becoming very popular with schools who have traditionally not included it in their syllabus. Students need to be trained correctly to ensure safety is the highest priority and good technique is learned. Basis tameshigiri (single target static cut) should lead to more advanced tameshigiri where the very techniques of the school are tested in an effort to combine both art and cutting ability.

Muay Thai vs. Kickboxing: "The Legendary Fight That Changed History"

Fight through the Pain